skip to main | skip to sidebar

A Word Like Tomorrow Wears Things Out @ Sikkema Jenkins 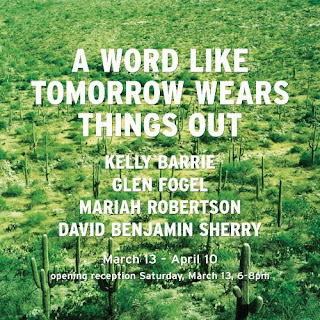 Sikkema Jenkins & Co. is pleased to announce the group
exhibition A Word Like Tomorrow Wears Things Out featuring
work by Kelly Barrie, Glen Fogel, Mariah Robertson, and David
Benjamin Sherry on view from March 13 through April 10, 2010.

Kelly Barrie will present works from his series entitled
“Between the Blinds”. Using photo luminescent pigments
manipulated with his feet, Barrie creates a large scale drawings
based on found images of subjects that no longer exist in there
original place or form. The drawings are then photographed in
sections over the period of a number of days and weeks,
resulting in over 100 images which are stitched back together
with the use of a computer. Each photograph retains a slight
color cast which is dependent on the time of day it was taken
and the angle or incidence of light. These color shifts, seen in
the final piece, represent a temporal register for the duration of
the work.

Kelly Barrie was born in London in 1973 and has lived in New
York City and Los Angeles since 1987. He received an MFA in
Photography from California Institute of the Arts and continued
post-graduate work in the Independent Study Program,
Whitney Museum of American Art, New York.

His photography has been exhibited at the 2008 Biennale of Sydney,
Australia and the 2008 California Biennial. As well as solo shows at
Miler Durazo Fine Arts and Angstrom Gallery, Los Angeles, CA,
his work has been represented in numerous group exhibitions
including Sikkema Jenkins & Co, New York, Hyde Park Art Center,
Chicago, NY; Queenʼs Nail Projects, San Francisco, CA; Artists
Space, New York, and the Museo Alejandro Otero, Caracas. He is
also a recipient of the Durfee Artist Completion Grant.

Glen Fogel will be exhibiting two recently completed works, a
video installation titled Art from Kansas City, and a sound and
light piece titled Glen from Colorado. Conceived of as
companion pieces, the two works function as distinct yet
related portraits of the artist: one is mapped onto a pre-existing
politically charged memoir, and the other from the artist’s
personal archive. Both works conflate minimal forms with
emotionally, psychologically and politically charged material,
and explore the complexities of identity-formation.

Glen Fogel lives and works in Brooklyn. His work has been
exhibited widely, including such venues as The Kitchen,
Momenta Art, Artists Space, NGBK (Berlin), Callicoon Fine Arts,
and the Museum of Modern Art (NY). His work has screened in
the Toronto and London International Film Festivals, and in
2002, he was included in the Whitney Biennial. Fogel has an
MFA from Bard College, and has received grants from the MAP
Production Fund, and the Rema Hort Mann Foundation. He has
an upcoming solo exhibition at Participant, Inc. Support for
Fogel's work was provided by a 2009 Princess Grace Award.
Mariah Robertson’s unique photographs are the result of a
variety of darkroom techniques and the chance incidences that
happen during their processing. The resulting images are a
chaotic mix of representation and abstraction.

Mariah Robertson's work has been exhibited extensively
including two solo exhibitions at the artist run gallery Guild and
Greyshkul, NY. Her work has been recently included in the
collections of the Museum of Modern Art, NY and the LA
County Museum of Art, CA. Robertson's work has recently been
included in multiple publications, including: Art In America, Art
Forum, Art Review and The New York Times. She is
represented by Museum 52.

David Benjamin Sherry will present variously colored
monochromatic photographs displayed in an installation format.
The works spans most fields of photographic work: landscapes,
still lives, portraits, abstractions, camera-less photographs and
self-portraits. Sherry’s practice is based in traditional color
photography using pre-digital darkroom techniques to create “a
world based from my own experiences and transforming [the
photgraphs] into a more fantastical, magical, new and exciting
visual atmosphere that transcends reality and challenges
thoughts on existence, spirituality and my intimate relationship
with nature.”

For additional information contact Scott Briscoe at
212.929.2262, or scott@sikkemajenkinsco.com.
Posted by Kelly Barrie at 11:31 AM